Jose Silva began his research into the mind and human potential in 1944, and began teaching courses based on his research findings in 1966.

He continued to conduct research to find a reliable way to communicate with, and obtain guidance from, higher intelligence.

He finally found the answer in 1997 with the MentalVideo Technique, which is at the heart of his new UltraMind ESP System.

Jose Silva's UltraMind ESP System is the culmination of Jose Silva 55 years of research and experience in the mind training field.

We are proud that we have been helping people learn Jose Silva's techniques through our best selling home study courses during the past 3 decades, including these groundbreaking programs:

By the way, if you want to know where the name "Avlis" came from, just spell it backwards.

What makes us unique

We also know how to help you learn to use the Silva Systems. We have worked with the Silva International Graduate Association (SIGA) since it was founded by Jose and Juan Silva in 1982 as the official alumni association for Silva graduates. SIGA membership is included free with all of our home study courses and live seminars.

If you have any questions about working with us to present the Silva UltraMind ESP System, please use the Contact Form to contact us.

You can be assured you are getting genuine Jose Silva materials and information directly from the mind of Jose Silva when you purchase products from Avlis Productions:

You have a right to know who and where we are, and to know about our background and experience, so we invite you to meet the leaders of the Avlis Productions team: Ed Bernd Jr. grew up in the newspaper business. He took his first Silva class in 1975 and began teaching the Silva Method in 1977. In late 1981 Mr. Silva asked him to join the company's world headquarters staff in Laredo, and he has been here ever since.

One of his first projects was editing Jose Silva's autobiography. In all, he has worked on more than a dozen books with Mr. Silva, as editor or coauthor.

With Mr. Silva's help, Ed developed Silva programs for sales people and athletes, he participated in holistic faith healing research with Mr. Silva, and he helped prepare manuals for the new Silva UltraMind ESP System. He has been coordinator of the Silva International Graduate Association since 1983. Jose Silva Jr. - known as Joe or Joe Jr. to his friends - is one of the last links to his father’s pioneering research, and he serves as special consultant to Avlis Productions.

Joe was born in 1941, the first of Jose and Paula Silva’s 10 children. When his father began to experiment with hypnosis in the late 1940s using Joe’s younger sisters and brothers as subjects, Joe was there to help and to document much of the research. He recorded pre-natal age regression sessions when his siblings went back to so-called "past life regressions."

Eventually the research led to a way to develop ESP and Joe and the other children were encouraged to practice it at every opportunity. During those same years, Joe and his brothers also helped out in the family’s electronics repair business.

Joe was in the U. S. Navy serving in Vietnam when his father began taking his findings to the public in the late 1960's via a series of workshops. There was a huge demand for Jose Silva’s "Mind Control" method, as he called it back then, so Mr. Silva asked Joe to come back to Laredo as soon as he could and help run the new seminar business. Joe returned to do just that in 1969, and was one of the three incorporators of Silva International Inc.

In 1995 Mr. Silva asked Joe to take over the Presidency of Silva International, a position he held for more than 10 years. In 1998 when they set up a new company to manage the new Silva UltraMind ESP System, Joe was named director of that company and assigned the majority ownership.

Throughout the tremendous growth of the Silva Method from its modest beginnings in Laredo, Texas, to more than 100 nations around the world, on to the new trail blazing UltraMind ESP System, Joe has been the most consistent factor, along with his father and his Uncle Juan, who was a co-researcher with Jose Silva.

Joe’s unique perspective of observing his father’s research and the results it produced has provided great insight to help him make good decisions for the companies that manage the business, and for the worldwide team of Instructors who depend on the Laredo headquarters to help them present seminars that accurately represent the research so that people around the world can take full advantage of Everyday ESP in their own lives.

Joe has been married to his wife Ruth since 1967. They have two children, David and Ruthie, and five grandchildren. Joe holds a black belt in Karate, and helped Ed develop the Silva Star Athlete program in 1984, and The Silva Method-Think and Grow Fit book, which was published by Career Press in 1996.

We are not hiring people to teach. This is a Business Opportunity. 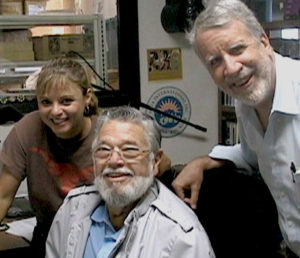